"The number one killer is time. It destroys us all..."

Meyer Physics Research Center, contains plot and/or ending details of Quantum Break and its related media. Proceed at your own discretion.

Jack: "Hey, do you know where the physics building is?"
College Boyfriend: "You mean the big ass metallic turtle behind me? Hard to miss, man."
—Jack asking for directions[2]

The Meyer Physics Research Center[2][3] is a research facility located on the Riverport University campus.

When Jack Joyce arrived on the University campus, he was directed to the physics building after speaking with his friend, Paul Serene and one of the students participating in Amy Ferrero's Anti-Monarch protests.[2] The center's Project Promenade Lab was the epicenter of the Fracture when the a miscalculation in the design University time machine caused the machine to malfunction and destabilize the Meyer-Joyce field.

When Monarch Security attacked the lab, Jack and his brother, William Joyce, were forced to escape into the University maintenance tunnels and through the labs. When a stutter occurred, they were able to escape the physics building without being stopped by Monarch Security guards.[7]

Because the core of the University time machine was taken from the physics building and relocated to Monarch's central headquarters[8], when he used the machine to travel back to the past of October 9th, 2016, Jack was able to leave Monarch HQ and arrive back in the Project Promenade Lab moments after the fracture occurred.[7] 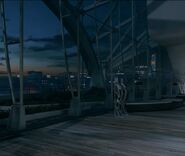 Retrieved from "https://quantumbreak.fandom.com/wiki/Meyer_Physics_Research_Center?oldid=9590"
Community content is available under CC-BY-SA unless otherwise noted.